How to Move a Peloton Bike to a Different Location

The Peloton bike is a costly piece of equipment, which is one of the main reasons you should treat it with extreme caution. When you buy it, the delivery team will ensure it is safely installed in your home, but at some point, you may need to move the bike. This is why it is crucial to learn how to move a Peloton bike.

While some people may prefer to hire movers, moving a Peloton on your own isn't impossible. However, there are a few things to consider before getting started.

To avoid any damage, you need to dismantle the individual components completely and package them separately, for instance, the touch screen, weight holder, water bottle holder, and sweat guard. Keep reading to find out more about how to move a Peleton bike and keep up with your fitness goals.

Do You Need Extra Hands to Move the Peloton Bike?

Both yes and no. If you're transferring the bike downstairs or upstairs, you'll need extra hands to ensure that the hefty bike is lifted where it's needed. The small wheels at the front commonly referred to as the transport wheels, will come in useful if you're only moving it on level terrain.

Things To Do Before Moving the Bike

Here are things you need to do before moving your bike from one room to another;

1. While moving the bike from one room to another or from one location to another, you need to remove the touch screen as it is the most fragile portion of the bike. Removing and putting back the screen is a straightforward process that you can complete on your own.

2. Take off all movable items from the bike. The bicycle/cycling shoes, which most people prefer to leave near the seat clamp, the weights, and the water bottle are among these items. This protects items from falling off the bike and causing harm while in transit.

3. If you're transporting the bike by truck over a long distance, you'll need to remove the bike pedals as well. Keep in mind that even if the pedals are robust, they are prone to breaking if the bike falls.

4. While traveling a long distance, make sure to tighten all of the bike's nuts. You can also consider lowering the bike seat and handlebars to the most powerful and long-lasting position.

How to Move a Peloton Bike Within One Room

How to Move a Peloton Bike from One Room to Another

If you want to move your bike from one room to another within your home, follow these steps:

Before unplugging anything, you need first to switch off the power at the main power supply for safety reasons. Here are the basic steps on how you should do it;

It is important to ensure that you put this screen on a clean, soft and safe surface, face down. This ensures that the screen won't fall and prevent the screen from a cold surface. You can also wrap the screen using a bubble wrap or heavy towel to protect it further.

Remove the touchscreen and place it behind the bike, holding it by the stabilizers. Then, using its front transport wheels, push it into the room you want.

Retrieve the touchscreen in order to reinstall it on the bike. You won't waste time before your next session if you do it this way. Furthermore, the screen is safer on the bike than it is at a specific location.

You'll need a carrying truck if you're moving or simply bought a used peloton bike. Furthermore, removing the touchscreen isn't the only way to alter the bike. Here are the steps you should follow;

As mentioned earlier, the touch screen is the most delicate part of the bike, and therefore it should always be removed during the moving process. The process of removing the bike screen is similar to the one above. 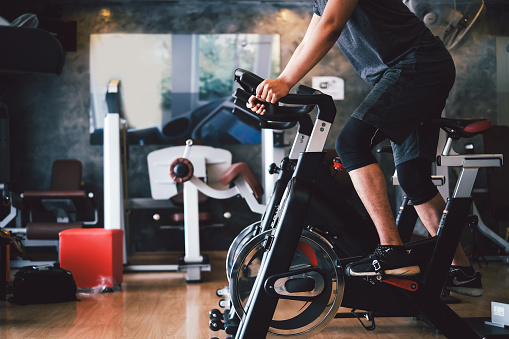 On the Peloton bike, the weight holders are located right below the bike seat post. You'll need your Phillips screwdriver once again.

5. Push Down the Handlebars and the Seat

Set the handlebars and seat to the lowest position possible. This way, the seat will be at their most effective, reducing the risk of breakage. You also need to ensure the adjustment levers are well tightened before moving a Peloton.

6. Move- How To Move a Peloton Bike by Truck

The bike is ready for transit once you remove the peloton touchscreen, the water bottle and its holder, the weights and their holders, the right and left pedal, as well as the power cable.

If the distance to the new location is long, then it warrants the use of a truck or a transportation vehicle. You'll need a second person to assist you with the move.

Holding the bike by the backside of the seat and raising it by the wheels allows you to move it. Then, move it until you reach the spot where you require assistance, such as near the door.

So, as your friend grabs the handlebars, hold on to the rear stabilizers. Carefully exit the house, pausing at many points to assure your safety. When you're on flat ground, you can ride the bike with the front transport wheels slanted backward.

You must communicate regularly, which aids in the safe transition of the bike. Once you've gotten out, hoist the bike onto the truck and place it in the back. To keep the bike from falling over, use strong straps to tie it from one side to the other.

Ensure you drive the truck slowly to keep the bike safe, even on rough road patches, whenever you can. You can consider contacting moving companies and getting a moving vehicle that is in a good condition.

7. Moving the Bike From the Truck

Once you've arrived at your location, remove the ratchet straps to untie the bike. With someone's assistance, carefully remove the bike from the truck. Carry the bike to the new house by holding the stabilizer while your helper is holding the handlebars.

1. How much does a peloton weigh?

Pelotons are large exercise bikes with a lot of weight. Depending on the model, they might weigh anywhere from 135 to 140 pounds. The flywheel may weigh up to 40 pounds on its own. Pelotons have a four-foot-by-two-foot footprint. That's a great deal of weight per foot.

During hard rides, the bike's weight and size give much-needed stability. As a result, if you decide to push yourself throughout your workout to the maximum, your bike will not shift out of position.

However, when it comes to moving these bikes to a new place, their weight can be a concern. You will most likely be unable to transport or lift your Peloton by yourself. But if you're simply moving it to another room, the wheels are included to make it easy.

Yes, you can tip a Peloton over, but only after removing the bike's fragile components, including the touchscreen, pedals, water bottle holder, and weight holders. These pieces will most likely shatter if you try you put the bike on the side.

3. Does moving a Peloton void warranty?

Any damage or equipment failure caused by moving your Peloton on your own will not be covered by Peloton's warranties. This entails disassembling and reassembling all of the components. The warranty only allows Peloton authorized Service Techs to work on your bike.

Basically, once you begin the transferring process, you are waiving all responsibility from Peloton if something goes wrong.

Afulltable blog is A Participant in The Amazon Services LLC Associates Program. An Affiliate Advertising Program designed to Provide A Means for Sites to Earn Advertising Fees by Advertising And Linking to Amazon.Com